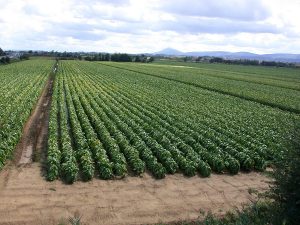 Bergerac Seed & Breeding owns a catalogue of proprietary male sterile tobacco varieties which have been created through decades of breeding activities. These varieties have been developed in order to integrate pest and disease resistances, for the adaptation to specific growing conditions and for some specific leaf properties.

PDF version of the catalogue

Most of our varieties are F1 hybrids.

Do not hesitate to contact us to help you in choosing the best varieties adapted to your growing conditions.

Free samples are available upon request.

Shisha tobacco refers to the flavoured tobacco which is smoked using a water pipe, in which tobacco smoke passes through a container of water prior to inhalation. The tobacco used for shisha is typically shredded tobacco leaf flavoured with molasses, honey or dried fruits.

This use of tobacco originates from the Middle East and certain areas of Asia, but in the 1990s, it became popular in the Eastern Mediterranean countries and its use eventually spread around the world.

The tobacco produced from Bergerac Seed & Breeding French Filler Flue-cured varieties, when grown and cured in appropriate conditions, is very popular with shisha tobacco manufacturers for several main reasons, that are essential for a good quality shisha product:

– its low level of nicotine and high content of sugars,
– its pale lemon colour,
– its high absorbing capacity of molasses,
– and the fact that it does not change its colour during the shisha processing.

France is historically a country of dark tobacco and there are plenty of vintage photos showing the brown leaves packed in bales covered with jute cloth, ready for the fermentation stage before going to the French factories to be transformed into Gauloises, Gitanes and cigarillos.

Today these factories have disappeared following the demand of the consumer slowly moving towards blond tobacco. However, Bergerac Seed & Breeding is now working more than ever to revive this type of tobacco with such a specific taste. Although French know-how has been built mainly around the production of dark filler tobacco for cigarettes, small more specific programs have been developed for different uses that give dark tobacco back all its former nobility and a real development potential for French tobacco growers:

This type of tobacco, which is only permitted in some northern European countries or in North America, is consumed as a wet powder. The usual method of consumption is to place the product between the gums and the upper lip and keep it in place for a period that can range from a few minutes to several hours. The powders used are made up of a blend of different types of tobacco and dark tobacco traditionally has an important place in it.

The making of a cigar is a complex exercise that requires the right taste balance of the filling tobacco blend, a just density that will bring a good combustion, and a perfect aesthetics brought by a mastered rolling technique. By their aroma, their thinness and their elasticity, the leaves used as a binder and as a wrapper, ideally of natural tobacco, will bring the cigar or cigarillo the final touch of their design.

For each element that composes a cigar or a cigarillo we have selected varieties adapted to the constraints of the French and European terroir, for crops in open field or under shade, and for dark tobaccos intended to be gently air-cured or even fire-cured. Do not hesitate to submit us your cigar or cigarillo design project, we will advise you the varieties best suited to your creations.

How to find us